Here’s my account of my Tour du Mont Blanc trek…
Starting from Les Houches, it was a bit of a slog in the heat and not being acclimatised to the altitude, and carrying quite an heavy pack up to Col de Voza, didn’t get great views from here, but the walking became more enjoyable. Seemed to take quite a while to get to Col de Tricot (though I did stop halfway up for a picnic), and I made my way slowly down to Miage, by that time it was 4 pm and I felt like calling it a day – but I thought “it’s not so far to Les Contamines” – how wrong I was – had to ascend and cross another pass (Le Truc) and descend sharply all the way to Les Contamines, and even then the campsite was a 30 minute walk from the village. 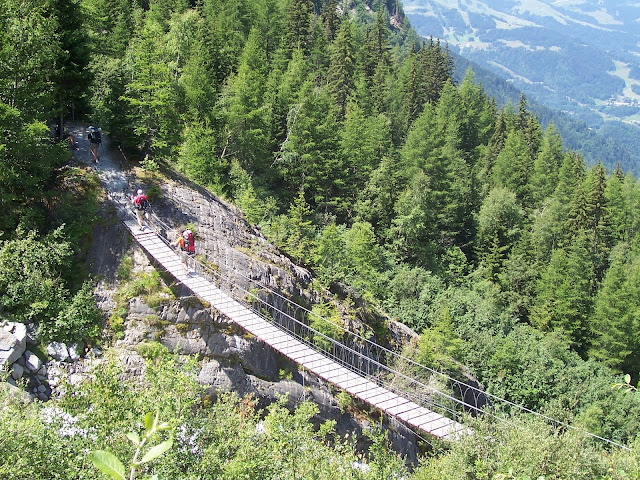 Bridge over Torrent du Bionassy
I would advise anyone starting the TMB from Les Houches to go as far Miage or le Truc and make that your first stage, and break yourself in gently. Either one of these seem like a nice place to stay.

From the campsite at les Contamines, the trail followed the river and then steadily up on a paved track past La Balme – a word of warning to anyone bivvying near here – you will be refused an evening meal if you’re not staying at the refuge (didn’t happen to me, but I heard from some guys who did and were). Above la Balme I took a side-trip to Lacs Jovet, well worth it, if you have the time. I ate lunch by the shore of the lake, then returned to the TMB path and up to Col du Bonhomme, and onwards to the refuge Col de la Croix du Bonhomme – was free to camp here – and the evening meal was hearty and filling. Was a windy night and the noise from the wind turbine was a nuisance – sounded like a low-flying aircraft! It’s well worth having the breakfast here too – lovely fresh, wholemeal bread (and plenty of it) home-made honey and jam too. 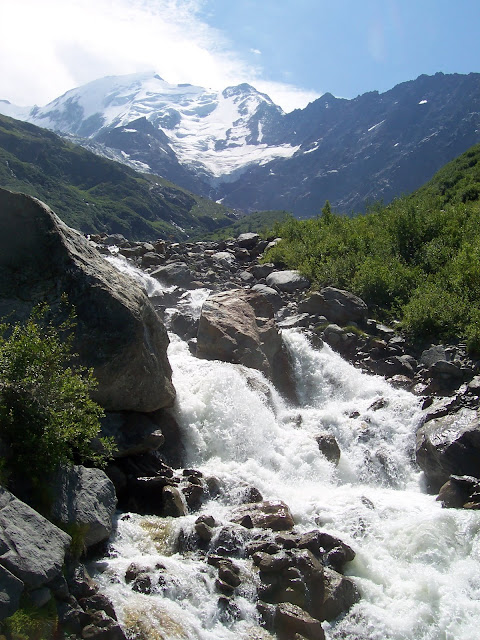 Torrent du Bionnassy
I set off up to The Col des Fours and down to Ville des Glaciers, then up past Refuge des Mottets and the steady ascent to Col de la Seigne, didn’t get good views from here – which was a shame, as this is supposed to be one of the best views of the TMB. Funnily enough, the next day I met an English walker who passed by here an hour or so after I did, and he had great views! On the descent to the spectacularly situated Rifugio Elisabetta the views got much better for me. Pitched my tent by the hut (free camping) and sank a large bottle of Birra Moretti. Friendly staff but the meal wasn’t the best here.


Awoke to a beautiful, sunny morning and set off down the track towards Courmayeur, met an English guy along the way, and we walked together up past Alpe Superieure and along to Col Checroui (great views of the Italian side of Monte Bianco from here). The descent from the Col to Courmayeur was a bit of an ordeal in the baking heat. This should’ve been a short stage, but I didn’t make it to Courmayeur until almost 6 pm. Bought some supplies from a mini-market and wild camped that night just off the TMB trail out of Courmayeur. 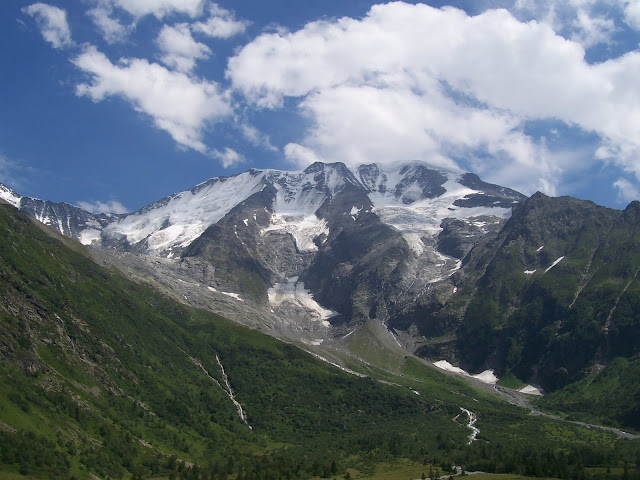 Glacier du Miage
Made an early start the following morning to make up a bit for some lost time on the previous day, it was a steep ascent to the Col Sapin, and the weather wasn’t so good – had some rain, but not as much as I’d feared. Continued over the Pas entre deux Sauts, then down for a lunch stop at Rifugio Bonatti. Couldn’t see much of the Grandes Jorasses, due to the low cloud. It did brighten up a bit in the afternoon, but then I got drenched in a heavy downpour on the ascent from Val Ferret to Rifugio Elena. Booked in at the Rifugio (great hot showers here), and did a load of laundry – even found a super-quick way to dry my stuff – there’s a huge extractor fan, outside the main entrance, just along the terrace. Food wasn’t so good here, but at the dinner table the prevailing weather forecast was the main topic of conversation, I was informed that snow was forecast overnight above 2000 metres. Slept surprisingly well in a massive dormitory, and sure enough, awoke in the morning to see that snow had fallen overnight – and it was still snowing!

It was raining in the morning when I awoke, but by the time I was ready to set off, the rain had stopped and the weather soon improved, and it was a pleasant walk through the valley to Praz de Fort. I left the TMB path here, and headed on up a different valley and up to the Cabane d’Orny. It was a good walk up, with fine views of the Glacier de Saleina, and as I gained height, Grand Combin came into view.

The Cabane d’Orny is an atmospheric high alpine refuge, chatted with some members of  a Swedish group, who were doing the Haute-route. In the morning I walked up the Glacier d’Orny, up to the Plateau du Trient. The glacier is stable and safe to walk on and not steep. Had a good look around up on the plateau, and spotted a do-able summit. 30 minutes later I was standing proudly on the top of the Pointe d’Orny – the views from up here were superb, and I have to admit that the weather was just perfect for me on this day. Stayed for a while on the summit, had a good look around and took lots of photographs. Walked back down to the Cabane d’Orny to collect the rest of my stuff, had a brew, then set off on the way to Col de la Breya. It was quite a rough path and steep descent from here to Val d’Arpette. Stayed overnight at the Relais d’Arpette, made use of my tent for the first time in a few days, and as it turned out, the last time on this trip.
The next stage of my walk was back on the TMB, the crossing of the Fenetre d’Arpette. In my opinion this was the toughest stage of the TMB, the descent from the Fenetre is quite steep, and the path is very rocky and eroded in places – and I’m not good on tricky descents anyway! But it was a good walk up to my destination for the evening, the Col de Balme. On the way up, I had fine views of the Glacier du Trient and the Pointe d’Orny (the peak I’d reached on the previous day) overlooking it. My overnight stay at the Refuge Col de Balme was something of an experience. Stepping inside the refuge is like going into a time-warp, the place looks like it hasn’t seen a lick of paint since the elderly Gardienne was a young girl! The creaking bunk-beds would sway in the night, if you turned over – it was like spending a night on the high seas! And for some strange reason the Gardienne kept locking the bathroom door. The only good thing I would say about this place is that the grub is pretty good (oh, and the views from the Col are stunning), apart from that – it’s a dump.

Met a nice Scottish lady at the refuge that night, and the next morning we set off  for a bit of a walk/scramble on the ridge just above the Col. We managed to get quite a way along the ridge with no difficulty, then returned to the refuge for lunch (again, I would say that the food there is pretty good). From the Col de Balme, Rachel and me decided to go on a bit of a detour from the TMB, so, from the Col des Posettes, we descended to Le Buet, and from there up to the Refuge Pierre Berard – a charming place, very well run (and great food). We stayed for the night and in the morning walked up to the summit of Mont Buet – was a good walk but was very windy and not good visibility. Had lunch at the Pierre Berard refuge, then walked back out of the valley. From Col des Montets we made the steep ascent to Chalet du Lac Blanc, just started to rain a bit as we approached the refuge, then 20 minutes after we’d arrived there was an almighty storm. Good timing, or what!!
The Chalet du Lac Blanc was the best refuge I stayed in on this trip. Comfortable beds in nice dorms, and the food here was the nicest too (generous servings too). We booked in here for 2 nights, and the next day had a light-pack walk up to Lacs Noirs, and again, made it back to the refuge before the evening storm.
I had stunningly clear views of the Mont Blanc massif when I awoke at 7 am, then after breakfast we followed the same path as we’d walked the day before, then past Lac Cornu, to Col du Lac Cornu and down to Plan Praz, then up to Col de Brevent, and to Brevent. Great views from Brevent, but the place is spoiled by the teleferique and ugly development, which is a shame. After stopping for lunch and admiring the views we left the “Chamonix day-trippers” behind and made our way down to refuge Bel Lachat. I found a small pool of water on the way down and took some good photos with reflections Mont Blanc.

The Bel Lachat refuge is well worth a night’s stay – to stay high up and absorb the magnificent views is surely preferable than being down in the valley, you will also catch the morning light, and weather permitting, enjoy breakfast on the terrace. It also takes the edge off the seemingly never-ending descent to Les Houches.

To sum things up I really enjoyed my time on the Tour du Mont Blanc, but what really made it for me was straying away from the main trail and doing some side-trips – my overnight at the Cabane d’Orny and getting up to the plateau and the Pointe d’Orny being a particular highlight.
Having the tent was worthwhile, even if I didn’t use it every night (in fact the nights that I stayed in the Refuges, I was certainly glad of the shelter during the storms) and the nights I spent in the tent saved me a few Euros along the way. Everyone seems to have there own way of doing the TMB, I met people who were using cable-cars and buses to cut sections of the walk out, groups that were doing short stages and taking rest days along the way, and one guy who was doing the whole thing in 6 days! As I’ve already mentioned, what really added something to it for me was doing the side trips away from the main route, which can feel a little crowded at times with it’s constant stream of walkers and even groups of pony trekkers! But I enjoyed my Tour de Mont Blanc, and might be tempted to return sometime and have a crack at climbing “the big one” itself... 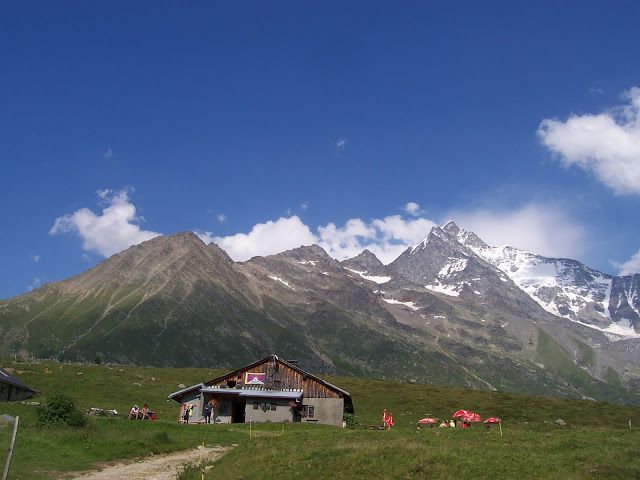